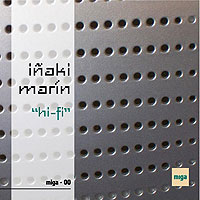 All the pieces of this reference are based on the license
Attribution-NonCommercial-ShareAlike 2.5 of Creative Commons.

Iñaqui starts at firsts 90´s triying to make music like his idols with Jupiter second hand synth and an Atari computer. In some months, he received a good offer to work in a studio with some good professionals and it´s a nice time to learn tecnical production and starts to release some techno pop tracks in different labels.

In all his life, he was interested in all the possible styles related to electronic sounds (E.B.M, synth pop, acid, etc etc) arriving to now, when he is manofactouring a personal fussion between some influences, in Regular we say he makes E.B.M: Electro Body Minimal.

His productions see the light in Regular in 2004 with Regular 04. and shows what can offer to the world, and now is his consagration with the release of Klinischtod, the first album of Iñaqui showing all his influences and his strong personality. An album release it at final of february 2005, and sure it will be in the charts for the dj´s over the world.

Iñaqui it´s a part of the Regular crew since a lot of time a go, Iñaqui and Jaume are friends from they where childs, and also togheter will offer a new live act for final 2005, with Jaume singing some tracks and with other surprises.

The release of his album Klinischtod around the world is every day bigger. The track “u can´t scape” is for example inside the new Fabric 23 compilation mixed by Ivan Smagge, and the tracks are included in the best charts of dj´s over the world.