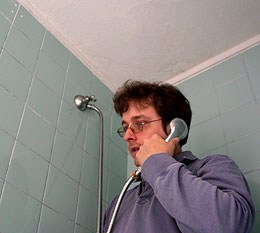 Luís Solís has been building his own particular world of sound during the last half decade. Although usually labelled as folktronica, his music, released under the alias of Bacanal Intruder, should be considered as a rich patchwork of references, including, of course, the mix of folk and electronic music done in a digital environment.

After a collection of eps, limited editions and netlabel works that started in 2003 with the promising ‘Shake The Christmas Tree’, Bacanal Intruder took a giant step to settle his personal style with his debut album ‘Lulo’ (Eglantine Records, 2006), the perfect synthesis of his versatile mix of pop, electronics, ambient, lo-fi folk, post-rock and bossanova.

His latest compositions are based on this solid foundation to carry them to a higher level. More melodic and accessible in the pop side, improving his experimental landscapes, going from the saddest melody to the brighter song, his unmistakable wall of sound is, nowadays, a must.