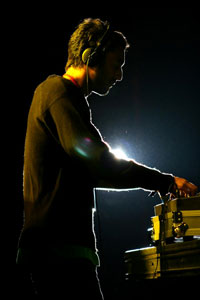 Duke Kahannamoku is one of the projects in wich Enrique GK is involved. Ohmios Record´s co-founder and one of the most active protagonists in the current electronic Asturian scene, will be able to define him as an authentic vinyl sybarite. G-Kahn hoards as principal qualities his infinite musical baggage and the elegance that transmits from the cabin. These characteristics symbolize his deep interest for the musical investigation and allow him to confront eclectic sets that can progress in different sonorous directions.

His quality like artist is something that has been intrinsically tied to his person from his beginning, waking interest up in addition to the persons in charge of numerous festivals and events at the moment of relying on his services. This chameleonic capacity that he presents as Dj comes reinforced by his skill at the mixing moment, which turns him into a complete artist, with a musical speech without scarcely fissures.

In spite of being less known his facet as producer, G-Kahn has managed to work a style defined well after many years of sonorous investigation and musical experimentation to the margin of any trend, managing to form his predilection and transmitting the immense quantity of influences that come together in his interior, which does not do any more that to reinforce his high artistic value.