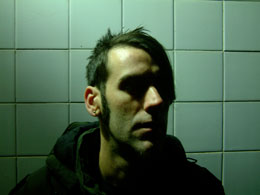 It_boy (from Gijón, Asturias) is Raúl T. Andrés, composer, producer and mc. He started his musical career in the 90s becoming part of False friends and 1901. In 2002 he founds Lego my ego together with Iván García (dj 40 oz), one of the first experimental hip hop groups of the Spanish scene.

He has taken part in numerous projects enriching his musical evolution and he has shared stage with Dj Krush, Thomas Fehlmann, Reeko, Rinôçérôse, Zombie Nation, Exium, Stoned Athmosphere, Mala Rodríguez….. with an upward exposure that in 2002 led him to receive a Bilborock award together with Lego my ego for the most innovative proposal.

In 2008 the need to work on new individual projects comes up and then is when It_boy is born. With an LP on the way which will be released on Audiovisual Theorem and his first ep Tam tam, published the last year, It_boy has managed to perfectly combine the most avantgarde electronica with hip hop’s melodic energy, synthetic structures and frail organic melodies, creating an unique concept which evolves with every live performance.