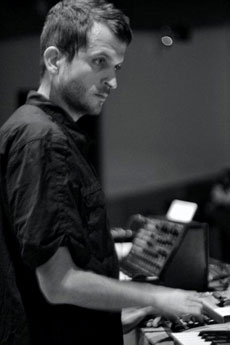 Mr. Haselbain was born in 2005, when Diego Adrados Gonzalez, after being part of several bands mainly focused on punk and hardcore, decides to get into the electronic music world, in 2000. That happened after getting in touch with a Korg MS20, when he starts playing adly that synthesizer as he was playing with a toy. Step by step he starts being attracted with this infinite sound, and in 2001 his father gives him a Pentium II PC which he starts using Reason, sampling his Korg MS20 and getting his first music secuences.

At the very beginning he creates very esperimental themes with a non particular music style, because of all the music styles that influeced his own self: hardcore, punk, electro, techno, rap, IDM, classic, jazz, house... His inquietude and relationship with music has taken him to create new knicknames such us D@pe@r (electro), not to blend all those music styles under the same name.

In 2008 Diego proposes David Herguedas to get part of his group, contributing with lyrics and opinions. That was the birth of current Mr. Haselbain, a non convencional music group with very interesting lyrics in spanish, english and french, and no barriers.