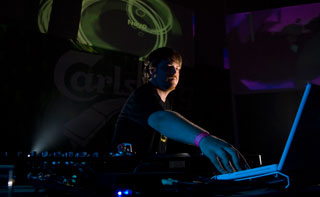 Its beginnings date back to 1997, mesmerized by electronic music and the art of mixing music. Over this last decade has witnessed the evolution of electronic music, adapting it from a vanguardist position and getting to play various musical styles within the field electrónico. Artist with a very elaborate and constant path, which has led to go through all the clubs in Asturias, a long list of venues and festivals on the national scene, and even Eastern European countries like Slovakia or Czech Republic.

His passion for hardware and analog sound have led him to experiment with a large collection of synthesizers and drum machines. And over time achieved a sound and a very personal line, which makes his works have a character and its own seal. Dark, groove, strength and dynamism define its rhythms, fused with surround sounds, atmospheric, hypnotic tracks with very convoluted sequences.

During the early years of his tenure as the producer can find references on the market under his aka Nayo. Since early 2008 his works are signed with his original name "Alvaro Prieto", and create benchmarks for different labels such as Acid Milk, Illa Recordings, Funkdamental, Bucle, Miga ...

In his live act included the correlative coherence of all its work, causing a serious and constant harmony throughout the performance. Soon will come out one of his most personal project Backnoise Records a record label focused on electronic dance music sound without tags or annotations.