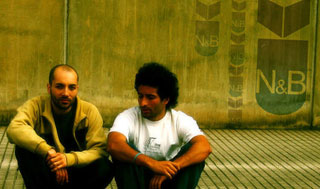 The mid 1990s saw the appearance in Gijon of Punto&Aparte, a group known for the use of highly dramatic melodies and samples. Of the five initial members, David Fernández and Eduardo Acosta are continuing the project, now under he moniker of Logic.

In 1998, Eduardo began to play with distorted beats, looking for sound landscapes and experimentation. References from Marseilles hip hop and from groups like NAP, Group Home or Infamous Mobb had a profound influence on the future project of Normaa. Classic dub would also find room in the roots of the sound of this duo.

Their notions of Internet and multimedia triggered off a particular interest for error, glitch and noise. In parallel, Raul Acosta was exploring the field of digital video, animation, postproduction and infography. In 2003, Raul and Eduardo pooled their respective know-how and concerns in a collaborative team with audio and video were given equal weight.

Normaa is an audiovisual project defined by the live developments of their actions, taking the flawed functioning of present-day society as a constant thematic reference. Beats, hip hop, dub, glitches and the most important: a visual discourse full of social references with a perfect development are the identity signs of one of the most interesting a/v projects of Spain.