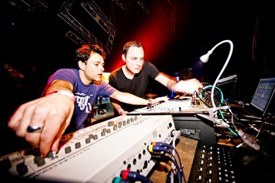 Towards the end of 2003 Dimi Angelis joins a talented Dutch artist Jeroen Search, with whom he produces Ion 01 and 02 EPs, which appeared on Steve Rachmad's new sub-label of Scorp, "Ion." These productions are to be described as deep, minimal, groovy techno, which are also the main attributes of the Counterpart live set.

In 2005, Dimi and Jeroen, released two EPs on the Dutch label Audio Sculpture: Oxygenating and Next Level. Crowning the success of their previous releases, they team up once again towards the end of 2005 to produce "The Martian Mystique" EP on Jeff Mills,s label Mission (6277/Axis) under the Counterpart alias. At the end off 2007 there was a new release on Oscar Mulero´s label Warm Up called "Counterpart EP". Finally there will be the release "Apocalypse EP " in March 2008 on Audiosculpture.

Aswell at the end off March 2008 Counterpart will release super bomb track "Project 2302" on Kombination Research which will be a collaboration ep from The Advent vs Counterpart.Currently Dimi Angélis & Jeroen Search have put together a dynamic/energetic live act with a Roland 909 and plenty of hardware. They will be on tour through out the world under the Counterpart alias.

The international kickoff of Counterpart took place at the Rex Club in Paris in Januari 2007, and their debut on Dutch soil was scheduled at the world's leading techno event, Awakenings in the Westergasfabriek in Sept 2007.