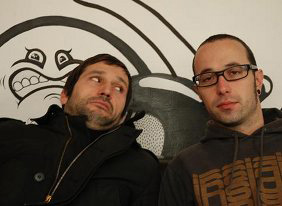 The union of 2 great friend and recognized as djs or producers of Catalonia, Manel Ruiz aka Sistema and Javier Orduña aka Retronouveau, gets as a result the ambitious project called DEEPS EDAYAR.

After some years in labels like Factor City and Minifunk, starting his own label Neue Lärmklassiker, Sistema is consolidated as one of the outstanding artists of the electronic scene of the country after 25 releases and his IDM related productions.

Nowadays Javier Orduña takes part of Retronouveau together with Héctor Herrera, after years working on a sound close to Birmingham on 2nd room, his own label beside his releases together with Mark Broom for Rubrik Records, Cray1 Labworks and the last ones released on Pong Musiq and Overflow Records. Faithful to the music that they consume since years and with the one that they offer on every session, from Dub Techno sounds, Chicago, Detroit, begins this project taking as a reference those musical styles which on every production will be seen reflected, beside any personal interest as the IDM.

A well blended live set of two old guys with a lot of energy.