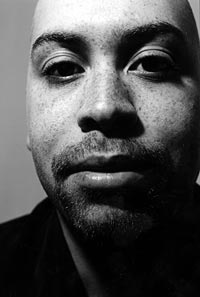 Fanon Flowers was born and raised in Kalamazoo, Michigan, exactly halfway between Detroit and Chicago, the birthplaces of techno and house music. A product of his environment, he grew up listening to Early 80's Euro-Dance Music, Chicago House and Detroit Techno.

At the age of 17, Fanon purchased his first synthesizer and drum machine and started buying dance 12" records. Mentored by hometown DJ/Producers Jay Denham and Tony Jackson, he soon developed a style which combined the funky, syncopated rhythms of techno with the soul of house music. Fanon has also composed tracks with fellow Kalamazoo Techno artists such as Chance McDermott, Damon Peterson (aka Baby Pop) and Donnell Knox (a.k.a. D. Knox).

In 1993 he moved to the Detroit area to attend Eastern Michigan University (also attended by Kevin Saunderson). He began to garner attention in 1994 when he appeared as Mode Selector on the "Elements of and Experiments with Sound" compilation on Detroit's seminal Planet E label. Subsequent EPs for such labels as Reference, Konsequent, Sheep, E-Com, and Holtzplatten established Flowers' reputation as a prominent American techno producer. In 1996, Fanon Flowers appeared under his Mode Selector alias on the "Detroit: Beyond the Third Wave" Compilation.

Released on Astralwerks, Flowers appeared alongside Detroit techno stalwarts such as Claude Young, Ectomorph, Sean Deason, and Anthony "Shake" Shakir. That same year, Flowers started his own techno imprint, Mechanisms Industries, to showcase his unique and funky approach to techno.

In 2000-2003, a sub-label project entitled Cetron (short for Creative Electronics) was launched as a platform for more percussion based material. Mechanisms Industries has developed a large following for their creative interpretation of the techno sound.

Famed techno DJs such as Jeff Mills, Surgeon, and Adam Beyer have been spotted playing releases from both labels. At the same time, Fanon Flowers has established himself as a stellar techno DJ and live act playing venues such as Ultraschall in Munich, Motor in Detroit, U-Club in Bratislava, Driver Club in Sweden, and Berlin's legendary Tresor Club. In May 2000, Flowers had the honor of DJ'ing at the first annual Detroit Electronic Music Festival, which attracted over one million people during its three day run and in 2004 Fanon Flowers played at the Czech Electronic Music Festival.