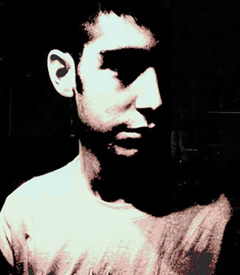 One of Spain's newest and most promising producers of techno music is Juan Rico, aka Reeko. At only 22 years old, this native of Oviedo, Asturias, has managed to do what has taken other top DJs years to accomplish - performances in Spain's best clubs and recognition amongst Europe's most exclusive techno scenes.

Reeko initial stages as a DJ date back to 1997 when, at the age of 17, he started playing at clubs in Asturias and León. In 1999 Reeko began to experiment with producing tracks from a home studio and developed the dark, aggressive sound for wich he is currently identified.

The breaking point of Reeko's career occurred about two years ago when he began to concentrate in his music with more fervor and stepped up his productions by adding more technology to his home studio. Reeko has been influenced by the intense sounds emerginf from the likes of Birmingham, and he uses these influences to create his own industrial sound. Reeko captures and re-captures listeners by filling his live sets with a series of climatic points, adding a touch of organized insanity to his sound.

From this special sound combined with his fascination in the human psychosis, phobias and fears envolved the inspiration for his label, Mental Disorder, and his first vinyl release "Psychiatric Hospital", which continues to be his most sold and sought after vinyl all over the world.

Reeko is beginning to launch his performance career beyond Spain to venues in the United Kingdom, Ireland, Holland and Belgium. During his first ventures outside of Spain he has already shared the booth with some of the world's most important techno DJs, all of which have praised Reeko for his musical innovations and carry his tracks in their bags.

He is currently one of the most prestigious producers of Europe's techno scene, and he has worked internationally for labels such as Theory, Main Out, Integrale Muzique, Deafmosaic, Emergece, Inceptive, Rxxistance, Trece Records, Infraestructure (New York).