[Miga32] "Music for camping" is the first Lp of the canarian artist Rominger. Living in Barcelona since the end of 90´s, he has collaborated in so many different musical (Sobreimagen, Velcro) and artistic projects (Pendrive, Plug Festival).

If we talk about music styles, Rominger moves inside the huge space between pop and electronic music, creating new contrasts and musical flavours. Leo (trumpet, synth, voices) and Yeray (drums), have been able to give expressiveness and character to this work, making an album that becomes into a great introduction letter.

In [Miga_v16] "Nice Summer", video clip that completes this release, Jon Herranz gives life to some of the characters that can be found in the particular world of Rominger. 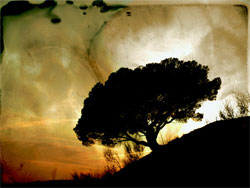 Jon Herranz began in the world of the image interesting by the photograph. After some years of investigation and self-taught learning passes to the cinema with the shooting of the short film “El principio del fin”. At present mixes his interest by both disciplines.

We could define his line of work like an investigation and constant experimentation in the new technologies of the photograph and the video that bases in the simplification of resources and in the self-touhgtlearning like a tool to obtain autonomous products and of quality.

His second and last work has been the videoclip realized for the group of electronic music Rominger. At present prepares a documentary on political and social actuality of the Sahara Occidental.