[Miga_v20] "El Gesto" (The Gesture) is a project, which is created as a visual arts reference in a research project. The aim of this research project is to interpret facial gestures. Creation and movement sequences of fixed images, linked to a three-dimensional animation are his offers. This is the main graphic resource of this work, together with the own esthetics, offered by gestural movement of human being.

Researchers show that 80 facial muscles are able to create more than 7000 facial expressions. Most of us can detect if somebody is happy, angry, amazed, frightened,... all these facial gestures create an esthetical range of movements that make us understand people’s mood and feelings.

This visual piece by Murfy is based on the theme music "Elles" released on [Miga26] No-More-Music Komite "Folk Hero". 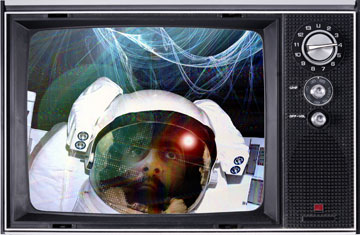 Murfy studied Fine Arts at Granada University. Currently, he is developing a research project about new technologies at Murcia University. A great part of his career has been focused on digital graphics methods, mainly in illustration and design. Nevertheless, Murfy has also been experimenting in video creations and video showings. Because of these experiences, he feels interested in the new resources offered by some low cost video and animation software.

In most of his visual projects, he uses electronic sounds as musical element and he also uses sequencer and guide to reach his own final results. Speed changes, image repetitions, video editing well coordinated with sound are just some of the great details that this Spanish artist can offer.

He produces and deals with some video projects for several music bands and he has been linked to VJ culture. Moreover, he has participated in electronic music festivals and he has created short movies, which have received awards and citations.