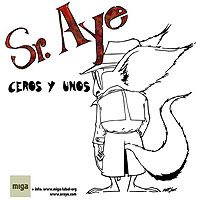 Salvador España is Sr. Aye, a musician working hard since the end of 90´s on his own private style. With known languages like hip hop, downtempo, IDM or minimal, he tries to take the listener to his world of melodies and beats, so particular and unique as an aye-aye.

During the last years he has been collaborating both as producing and managing Miga, a plattform which is working since 2004 on the artistic diffusion.

He also performed several live sets, developing both main ways of his music. One of them more experimental, focused to cultural events and festivals where he made sets mixing abstract hip hop and IDM. Among these events we can highlight Observatori 07, Electrosplash 06, Zemos98 06, Elektronikaldia 05, Territorios 08 and many others celebrated at cultural centres, museums and universities. As a complementary side, this artist also performed live sets on venues and clubs where dance is the main actor: Netaudio06 (Londres), Sala Macarena, Efimera II, Sala Emporio, Industrial Copera, etc.

In 2008 we will listen him on the project "Lugares comunes" made by the collective from valencia LACOMIDA, and in other different projects related with other artistic disciplines.